It might sound like cruel and unusual punishment to host a shower where the guest of honor can’t even partake in the main course, but a sushi shower is a hip way for urban parents-to-be to celebrate their little “edamame” with foodie friends. I hosted one for a friend this weekend, and it was the first time I’d ever been to a co-ed shower where the men didn’t want to leave when it was over!

First, decide if you’re going to make the sushi yourself, have it catered, or host the event in a restaurant, then pick a date and secure the location. I had it at the best sushi place in San Francisco, Sushi Bistro (yes, that one in the Iphone commercial). It was nice to not have to worry about preparing all the food, or cleaning up at the end, but if you’re more ambitious than I, you can make it yourself, or even prep all the ingredients and let your guests join in the fun of rolling their own sushi. However you do it, make sure there are lots of veggie and cooked alternatives for those pregnant mamas and folks with aversions to raw fish. 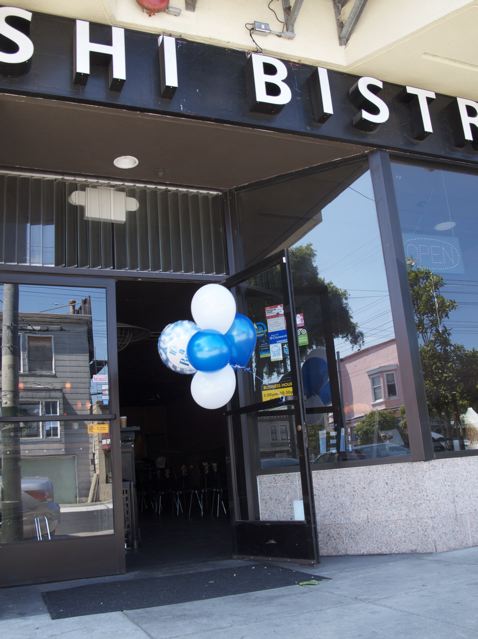 Send out invitations at least six weeks in advance. Again, be as ambitious as you want to be. There are pre-made sushi themed paper invites out there, or you can make your own, or if you’re lazy or tired because you’re pregnant yourself like me, do an evite.

Find decorations. It helps to pick a color scheme, or ask the parents if they have a nursery theme they’d like to go with. Since they knew they were having a boy, I picked blue and orange as the colors and kept the decorations minimal, since the restaurant is beautiful as it is. I did find this great idea for a sushi-themed alternative to a diaper cake, and made my own. It is common, though not necessary, to have a party favor for the guests to take home with them. There is also usually a dessert at the shower. I combined the two by making candy sushi and putting pieces in paper cake slices to go.

What else you plan is completely up to you and what you think your guests of honor would prefer. It’s helpful to set up a gift table at the entrance so folks know where to drop the goods right away. I didn’t plan any games, nor did we open presents at the request of the parents-to-be.  We just enjoyed the amazing sushi spread and plentiful sake that Chef Xin and his crew provided, and everyone had a great time. Have fun!! 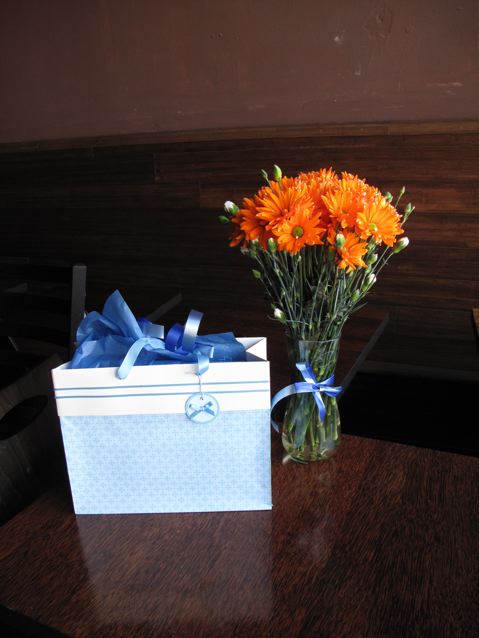 One thought on “How to Plan a Sushi Baby Shower”